Have you heard of the silent killer in the U.S. that kills nearly 270,000 people every year? It can strike people of any age, often without any notice. And rates are going up every year.

That silent killer is sepsis. Most Americans have never heard of sepsis. They have no idea what it is or what to do about it.

But knowing the signs of sepsis could save your life or the life of someone you love.

Sepsis is a life-threatening condition that can occur when you have an infection.

When your body is fighting an infection, your immune system releases chemicals into your bloodstream to help combat it. Sometimes these chemicals can trigger a response that causes inflammation throughout your body. Your immune response goes a bit haywire and can damage multiple organ systems.

In severe cases, one or more organs fail. In the worst cases, the patient’s blood pressure drops, their heart weakens, and the person ends up in septic shock. At this point, major organs (such as the lungs, kidneys, and liver) may quickly fail.

Septic shock kills up to half of the patients who develop it. The only way to prevent it is to catch the signs early enough to get fast treatment. According to the National Institutes of Health, more than 1 million Americans receive a diagnosis of sepsis each year.

What Are the 3 Stages of Sepsis?

The three stages of sepsis are sepsis, severe sepsis, and septic shock.

The early signs of sepsis often seem minor or look like other less serious conditions. Doctors diagnose sepsis when you have at least two of these symptoms:

Severe sepsis occurs when you begin to have organ damage. Symptoms of severe sepsis can include:

Septic shock occurs when your blood pressure remains very low even when you have received enough fluids. Symptoms include:

Any infection in your body can lead to sepsis, though most infections clear up when treated quickly and properly. The most common cause of sepsis is an infection caused by bacteria. The following infections lead to sepsis more often than others:

Only about 2% to 4% of sepsis cases occur because of an infection with a virus, fungus, or parasite. To diagnose sepsis, your doctors will ask about symptoms and perform a series of tests, which may include blood tests, an x-ray, or a CT scan.

What Are the Risk Factors for Sepsis?

Several groups have a higher risk for sepsis than average:

Risk of sepsis also increases with the following:

Sepsis can be difficult to diagnose in its early stages because the symptoms look similar to those of other conditions.

Doctors look for two or more of the following symptoms before diagnosing sepsis:

Other symptoms that you may recognize include:

If you have any of these sepsis symptoms, seek emergency treatment immediately.

How Long Does Sepsis Take to Develop?

Once the symptoms of sepsis appear, the patient needs treatment as soon as possible. It’s best to receive treatment within 6 hours. Some infections need treatment within one to two hours of the first symptoms to prevent long-term organ damage.

Can You Have Sepsis and Not Know It?

When Should You See a Doctor if You Suspect Sepsis?

You should go to the emergency department (ED) immediately if you think you or someone you know has sepsis. If you do not have a healthy person who can drive you drive you to the ED right away, call an ambulance or 911.

If you have only one of the symptoms below, call your doctor to ask what to do. But if you or someone else has several of these symptoms, seek medical care immediately:

Treating sepsis starts with stopping the infection that caused it. This nearly always means receiving antibiotics to fight a bacterial infection. The medications may be different if doctors confirm you have a viral or fungal infection.

Doctors work quickly to treat the infection after they detect sepsis. They may also use any of these treatments:

The sooner you receive treatment for sepsis, the more likely it is that you’ll survive. Survival also depends on what caused the sepsis, other conditions you have, and your overall health.

Some people who have had sepsis later have complications after going home from the hospital. If that happens to you, ask your doctor how to treat any symptoms.

Can Sepsis Be Cured?

Doctors can often cure sepsis before damage to organs occurs. People who receive treatment within the first 6 hours of symptoms appearing usually do not have long-term damage.

How long it takes to cure sepsis depends on the patient and the infection. It usually takes at least several days to cure the infection. If the bacteria is resistant to antibiotics, it can take longer.

People with a greater risk for sepsis include:

How You Can Prevent Sepsis

You can take basic steps to help prevent sepsis. 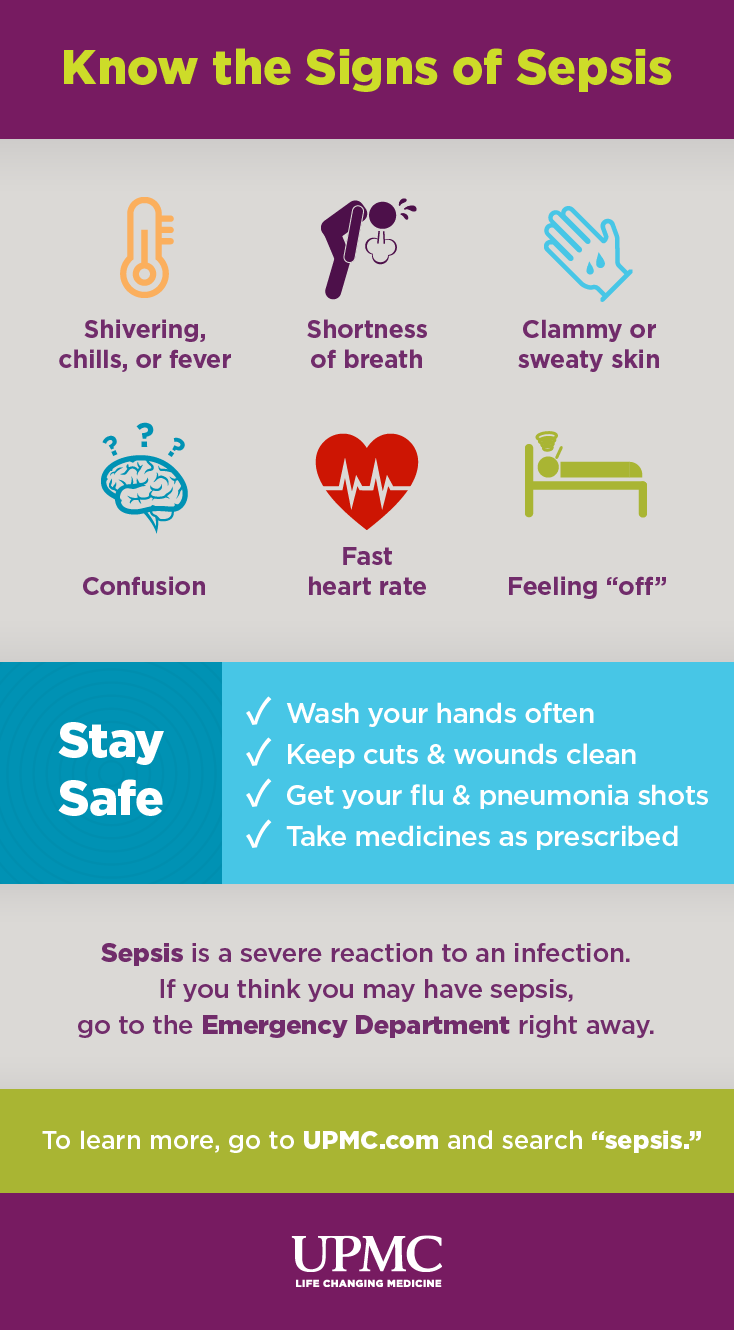 Headquartered in Pittsburgh, UPMC is a world-renowned health care provider and insurer. We operate 40 hospitals and 800 doctors’ offices and outpatient centers, with locations throughout Pennsylvania, Maryland, New York, West Virginia, and internationally. We employ 4,900 physicians, and we are leaders in clinical care, groundbreaking research, and treatment breakthroughs. U.S. News & World Report consistently ranks UPMC Presbyterian Shadyside as one of the nation’s best hospitals in many specialties and ranks UPMC Children’s Hospital of Pittsburgh on its Honor Roll of America’s Best Children’s Hospitals. We are dedicated to providing Life Changing Medicine to our communities.