Paul Eugene Green opens with a salsa ‚Äî two steps to the front, two to the back. A little sway in his hips as he moves.

The 61-year-old Pittsburgh man has taught dance and fitness to his nearly 20,000 YouTube subscribers for more than a decade. A few times a month, he takes center stage in front of a green screen ‚Äî he‚Äôll add a few glitzy neon graphics to the background later.

He choreographs, performs, and edits his own dance and workout videos, many of them at Pittsburgh Community Television studios. In a few clicks, you can find him performing a samba chair workout for senior citizens or shimmying to the beat of a hip-hop song. He calls the salsa-inspired video ‚ÄúPaul Eugene Dances Again.‚Äù

The goal of each video is simple ‚Äî to make fitness fun and accessible to his impressive internet following.

‚ÄúWhen I hear music, things inside me just click,‚Äù Green said. ‚ÄúDance to me is a universal language that touches people who can‚Äôt speak my language.‚Äù

Green was nearly sidelined in 2014 from his YouTube channel when he began to experience pain and weakness along the left side of his body. He tried to come to terms with the fact that he may have to hang up his dancing shoes for good.

‚ÄúI saw my life slowing down, and I was really not going to be able to enjoy the things that I was passionate about,‚Äù he said.

Green sought care from UPMC neurosurgeon Kojo Hamilton, MD, who performed an exam and diagnosed him with degenerative disc disease of the lower spine.

The road back to dance turned out to be shorter than Green thought ‚Äî Dr. Hamilton recommended a comprehensive physical therapy program, specially designed around Green‚Äôs love of dance. Back surgery wouldn‚Äôt be necessary, Dr. Hamilton said.

‚ÄúThe neurosurgeon used to be a sub-specialist who was at the end of the chain,‚Äù Dr. Hamilton said. ‚ÄúWhen you got the patient, it was when they needed surgical intervention. These days, the neurosurgeon, particularly in our system, is a comprehensive evaluator.‚Äù

Dr. Hamilton sent Green to physical therapist Erica Coffey, of UPMC Centers for Rehab Services, at the UPMC Rooney Sports Complex. She was uniquely qualified to get Green back up and dancing ‚Äî she‚Äôs been a physical therapist for the Pittsburgh Ballet Theatre for 16 years.

‚ÄúI‚Äôm just happy that there was a glimmer of hope, and I didn‚Äôt have to let my body deteriorate,‚Äù Green said. ‚ÄúThe physical therapy gave me that strength, and I‚Äôm able to move again.‚Äù 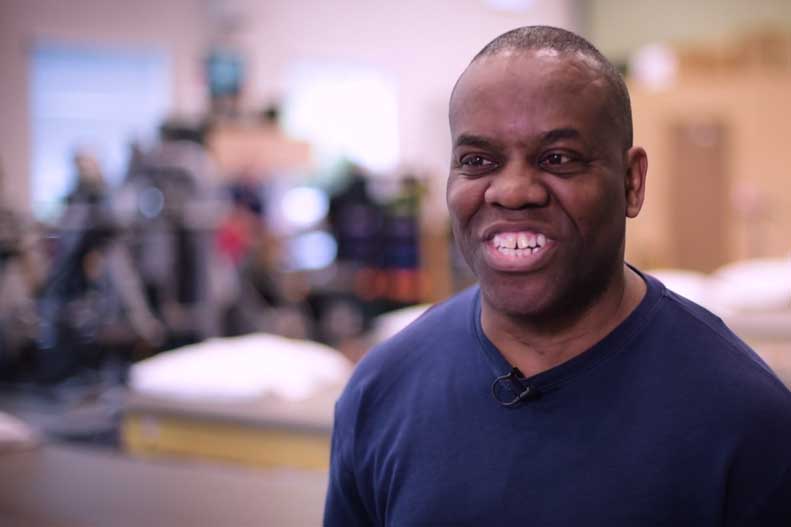 OrthopaedicsWhat to Know About Myelopathy

OrthopaedicsWhat to Know About Myelopathy

Back in Front of the Camera

The first line of defense for someone with back pain is typically physical therapy, Coffey said.

‚ÄúThe best part about Paul is that he‚Äôs really enthusiastic and really motivated, which makes my job a lot easier,‚Äù Coffey said.

During her evaluation, Coffey determined that Green had lost significant flexibility and core strength. She started his physical therapy (PT) program with exercises on the exam table ‚Äî and eventually got him up and moving, mimicking his signature dance moves to get him back to the studio faster.

‚ÄúA surgeon‚Äôs goals are to get the patient better. Sometimes they have to use one of their tools, which is surgery,‚Äù she said. ‚ÄúBut PT is significantly less expensive and significantly easier to recover from. So, most of the time, [a neurosurgeon] will use physical therapy as the first line of defense.‚Äù

A Passion for Dance

These days, Green, who is an employee at Neurology Services at UPMC, calls his recovery from pain ‚Äúliving hope.‚Äù

His YouTube channel has amassed more than 26 million views from around the world since its inception in 2004 ‚Äî and Green has even shared his recovery story in a YouTube video on his channel.

Headquartered in Pittsburgh, UPMC is a world-renowned health care provider and insurer. We operate 40 hospitals and 700 doctors‚Äô offices and outpatient centers, with locations in central and western Pennsylvania, Maryland, New York, and internationally. We employ 4,900 physicians, and we are leaders in clinical care, groundbreaking research, and treatment breakthroughs. U.S. News & World Report consistently ranks UPMC Presbyterian Shadyside as one of the nation‚Äôs best hospitals in many specialties and ranks UPMC Children‚Äôs Hospital of Pittsburgh on its Honor Roll of America‚Äôs Best Children‚Äôs Hospitals.