So, how much of a threat does the Zika virus really pose to you?

Zika is a viral disease transmitted through mosquitos, and sometimes, sexual contact. The virus has rapidly spread through Central and South America, and garnered much media attention in the process.

Though it generally causes mild symptoms, Zika can sometimes result in serious birth defects, making the threat of Zika potentially troubling for pregnant women or women who hope to become pregnant.

Sorting through reports and articles on Zika can be overwhelming, and some facts about Zika still remain a mystery.

Fact: The Zika virus was first detected in Uganda in the 1940s. Zika has been known to the medical community for the past fifty years, though it was assumed to only be mosquito-borne until relatively recently.

Until 2007, only a few dozen cases of Zika had been recorded. By 2015, a multi-country outbreak of the virus thrust it into the international spotlight.

Fact: You can only contract Zika through the bite of an Aedes mosquito, via sexual transmission, or by needle-sticks with infected blood. Casual contact and being near someone with Zika will not result in infection.

Myth: The Zika Virus is in Pennsylvania

A few state residents have been diagnosed with Zika, but none of them contracted the virus via a mosquito in the United States.

One of the species of mosquitoes that can transmit the virus does live in Pennsylvania, but there have been no local Zika transmission from mosquitoes in the United States. It is possible that a domestic transmission via mosquito will occur in the US in the future.

Fact: Only one in four people with Zika will develop symptoms, so the majority of those who contract the virus will show no outward signs of it. The most common symptoms of Zika are minor and include: 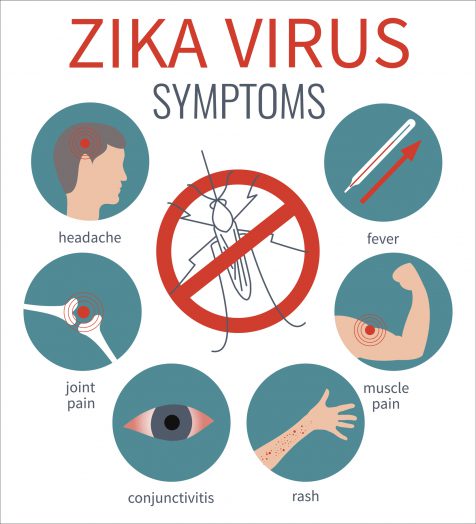 Myth: Men do not have to worry about any lasting, negative effects of Zika

Fact: If you have recently contracted Zika, the virus can remain in your system for up to two months. Men who have contracted the virus should abstain from sex or use condoms for up to six months to avoid spreading the disease to their partner.

Even if your partner is not planning to become pregnant, it is better to be safe rather than risk transmission and the potential of birth defects.

Myth: Zika causes the development of birth defects only in the first trimester of pregnancy.

Fact: Birth defects can develop across gestation, however Richard H. Beigi, MD, vice president of medical affairs and chief medical officer at Magee-Womens Hospital of UPMC, confirms the greatest risk is in the first trimester of pregnancy when the baby’s vital structures are forming.

As is common with other infections, only a minority of pregnant women with the Zika virus have babies born with birth defects, though the exact percent is unknown.

Fact: There is no reason to believe that DEET bug spray is risky for pregnant women. Reapply insect repellent as often as needed, especially if you are in an area where Zika is prevalent.

Myth: There is little you can do to protect yourself from Zika

Fact: If you find yourself needing to travel to an area affected by Zika, there are many steps you can take to prevent contracting the virus:

Avoid traveling to a Zika-infected area unless you absolutely need to, especially if you are pregnant or plan to become pregnant soon.

For more than a century, UPMC Magee-Womens Hospital has provided high-quality medical care to women at all stages of life. UPMC Magee is long-renowned for its services to women and babies but also offers a wide range of care to men as well. Our patient-first approach ensures you and your loved ones get the care you need. Nearly 10,000 babies are born each year at Magee, and our NICU is one of the largest in the country. Our network of care – from imaging centers to hospital services – provides care throughout Pennsylvania and Maryland, giving you a chance to get the expert care you need close to home. The U.S. Department of Health and Human Services recognizes UPMC Magee as a National Center of Excellence in Women’s Health, and the Magee-Womens Research Institute is the largest research institute in the U.S. devoted exclusively to women’s health and reproductive biology.